ALL INVESTORS’ EYES FALL ON YIELDS

Best Choice for the next weeks to months

Last week our Best Choice was for USDJPY and in the current week it is already 50 pips higher. The US 10-year treasury yield, climbed even more to 1.39% boosting the pair higher. Fundamental things have not been changed so this week’s Best Choice remains the same: USDJPY following the increasing yields is able to surpass 106 and to approach to the next resistance at 108.15 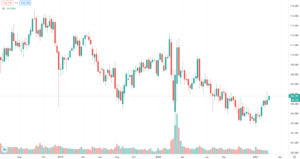 Enjoy these & other ideas in our mobile app. Download now :

Test 2 weeks for free & then decide. Cancel any time with no questions asked.

The basic message from both FED and ECB, is more or less the same: quantitative easing as long as it takes in order to deal with the consequences of COVID-19 to the respective economies. The remarkable event of the last weeks though is the important rise of the US bond yields: the US 10-year bond yield has reached the price of 1.39% which is a tremendous jump if we remember that during the end of last year, it was consistently below 1%.

We should also remember that the pricing of the basic assets globally is based directly or indirectly on the USD bonds yield and especially on the 10-year treasury yield. As these yields rise it means that all the assets (e.g., stocks) are more expensive and this develops a de-risking trend.

Such a development is expected to fear and to push the markets but in the same time, the commodities (and the relevant companies) markets will be benefit from this. We have already seen this behavior during the last days, which may intensify in the future.

The stock markets in USA and Europe performed a mild correction and in parallel, USD had a mild correction as well. GBP had important profits but EUR with its usual weakness could not take advantage from the weak USD. Gold kept on dropping, oil had some consolidations but copper had a remarkable rise and it is currently moving to a 10-year high price. Finally, Bitcoin continue its crazy rally, shooting down one record after the other.

The current week, besides the speeches from Jerome Powell and Christine Lagarde does not include very important scheduled economic announcements and events so all eyes will fall again to the US bonds yields, to the COVID-19 pandemic and to the Central Banks policies.

EURUSD (Euro vs US Dollar)

Consolidative trends for EURUSD last week, as it opened and closed around the price area of 1.2120. USD had a marginal decline but EUR could not take advantage of it since the economic results were not that bad but still the European economies issues are reflected. The speeches of Christin Lagarde on Monday and Jerome Powell on Wednesday, along with the announcements of the EU and USA GDP for Q4 2020 will define in a way, this week’s mood. We should also remember the EU Leaders Summit on Thursday & Friday. The pair seems weak to move higher, despite recent weakness of USD so in a case of USD strengthening it may move even lower, to the price area of 1.20. According to the above, we’ll open sell positions this week.

Another bullish week passed buy (the 6th in a row) for GBPUSD which managed to breakout the milestone price of 1.40 and to remain above of it even if the weekly open price was at 1.3850. The markets expect the speech of Boris Johnson this Monday for the lockdown easing map, since the vaccination process in UK has been accelerated and there is an optimum scenario that all the adults may have been vaccinated by the end of July. The bullish breakout of 1.40 confirms the uptrend of the pair and it’s possible under such a momentum to see even higher prices but in such cases of strong recent bulls, we cannot exclude corrections die to profit taking of some buyers. We prefer buy positions though for one more week.

Bullish was the last week for USDJPY as it opened at 104.92 and closed at 105.42 while during the week, we saw prices above 106. The US 10-year treasury yield climbed to 1.39%, performing a 20% rise during the last 10 days, boosting the pair higher. The economic announcements in Japan last week, regarding the inflation and PMIs had rather a neutral effect to the markets so we may see the uptrend that has started from the beginning of the year to carry on, above 106. Under these circumstances, we’ll open buy positions for one more week.

We may call last week as the “escape week from the price area of 127” for EURJPY. The pair opened at 127.18 and closed at 127.75 while early this week it is already moving above 128. Last time that we saw these price levels was in the end of 2018 and given the EUR weakness, it seems that the investors abandon and quit JPY. The next obvious target for the buyers is the price area of 130 but of course in such heights there is always the danger for corrections, originated by investors that take the profit. By trusting the uptrend continuation, we prefer buy positions this week too.

EURGBP carried on bearishly for one more week (4th in a row), by opening at 0.8742 and closing at 0.8650. The remarkable fact is the bearish breakout of the strong support at 0.8670 and given the strength (until now) of GDP and the weakness of the EUR, the price area of 0.85 seems as a realistic target. We’ll keep on being sellers on EURGBP.

Another bearish week passed by for USDCAD with a weekly open at 1.2683 and a weekly close at 1.2617. The oil prices had a mild decline but it did not stop the pair from moving lower, mainly due to USD weakness. Now the pair is very close to the multi-year support at 1.2590 and it makes sense to see bullish reactions as we approach these levels. A possible bearish breakout below 1.2590, opens the road for 1.25 or even lower so we’ll open sell positions only under this certain condition.

Bullish was the last week for USDCHF which opened at 0.8912 and closed at 0.8965, even if USD was mildly weaker. Now the next bet for the buyers is the price area of 0.90 because it seems that the pair is not able to catch this level, excluding the first week of February or even more to stay above it. We believe that there’s a good chance for it this week, so buy positions is our selection.

Strongly bullish was the last week for AUDUSD as it opened at 0.7765 and closed at 0.7869, breaking the resistance of 0.7820 which was a 3-year high price. As we expect the Interest Rates in China, we need to remark that the economy of Australia seems healthy enough and the return of the China into action after many days off (New Year celebration), boost the pair higher. It is very reasonable that after this price action for the buyers to dream the price area of 0.80 but it does not mean that there will be some sellers who may cause correction by taking their profit. We remain buyers.

Slightly bearish was the last week for SP500 which closed at 3,898 points, having losses that touched 1%. The US 10-year treasury yield performs a remarkable rise so many investors turn their eyes on this and even if there’s the expectancy for the package of the economic aid ($1.9 trillion) that should cause euphoria to the stock markets, the market was bearish. It’s possible to see this situation carrying on, pressing the Index to the price area of 3,860 but a solid return above 3,900 will bring back the optimism to the buyers who are able to go after the all-time highs at 3,960 points or even higher. Above 3,900 we’re keen to open long positions but below 3,860 points we prefer short positions.

Mildly bearish week for DAX30 as it closed at 13,953 point with losses like 0.70%. The general markets outlook combined with the all-time highs resistance of the Index caused this correction which may become deeper and steeper to the price area of 13,800 as long as DAX30 stays below 14,000 points. Above 14,000 points, most likely the smile will return to the investors’ lips and the target for new highs above 14,180 points will warm up. Above 14,000 points we’ll try long positions but in case of dropping below 13,800 points we may prefer short positions.

Consolidative was the last week for FTSE100 which closed at 6,560 points, without any price change. This Index had a better performance compared to other major Indices because the British economy is able to breath more in the near future if the lockdown ends soon with the according vaccinations acceleration. The long-term target of the buyers is the 1-year high price above 6,900 points while below 6,400 points the bears will be possible enough. We’ll prefer long positions, based on our thought that FTSE100 is able to outperform.

Strongly bearish was the last week for gold which closed at $1,783 by having losses like 2.25%. The markets start to develop a risk–on mood, considering that the COVID-19 pandemic will not be able to affect the economies for a long more time and despite the weakness of USD, gold moved lower, ignoring even the higher probability of a high inflation due to the expected Quantitative Easing. We also noticed that the gold price was not able to breakout the strong support of $1,765 and even if the trend of the gold is definitely bearish, we cannot exclude bullish reactions. Below $1,765 the downtrend may become steeper and in that case we;’ll try short positions but above $1,800 we may try long positions.

At the previous week, there was a pause to the oil prices rally as the next month’s futures closed at $58.97, with losses close to 1.20%. The cold and the frozen oil premises in Texas had a negative effect on the oil prices. The demand has not been increased significantly so far since many economies are still in a lockdown status while the production cuts by the OPEC members slowly come to an end. There is an optimism though that the perception regarding the pandemic end is able to recover the oil prices above $60 and in a more long-term view, above $65. On the contrary, below $58.50 there’s a higher probability for a further correction. According to the aforementioned, we’ll try long positions in a well-established price above $60 and short positions below $58.50.

Unstoppable was Bitcoin for one more week, closing at $57,493 with weekly profits that surpassed 18%. The milestone price of $50,000 fell easily and the capitalization of Bitcoin exceeded the mythical amount of $1 trillion. The positive news for Bitcoin and for cryptos in general become more frequent: The Bitcoin ETF managed to gather more than $165 million in a single day, Motley Fool a private financial and investing advice company announced that invested a remarkable amount in Bitcoins and even Bill Gates who claimed that he does not own cryptos, will put some research to the direction of currency digitization. While we all saw the target price of $100,000 that many analysts suggested as an extreme scenario, according to the recent outlook of Bitcoin, maybe it is more feasible than it looked like at the first place. Well keep on being long on Bitcoin for one more week.