A BIGGER CORRECTION IS COMING UP?

USDJPY was bullish for a third week in a row, confirming our Best Choice which was given three weeks ago. Our entry price was 105.25 and already we make more than 330 pips. US bond yields keep on rising, touching the price area of 1.60% and JPY keeps on being weak due to the risk-on mood of many investors. We will keep our current position, targeting 110 which seems as a realistic script. 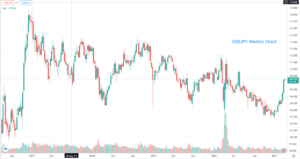 Enjoy these & other ideas in our mobile app. Download now :

Test 2 weeks for free & then decide. Cancel any time with no questions asked.

During the last weeks, the financial markets started to apply signs of heavy anxiety and concerns. The rise of the bonds yields caused concerns and a serious capital transfer from investments at technology companies to sectors like commodities, banking and companies that will take advantage of economy re-opening at the after-COVID-19 era. Even if the liquidity is still very high in the system, we may enter into a period of rising inflation that we have not seen lately and this fact finally will affect the market liquidity in a negative manner. During the next week, this fact may take for granted with a bigger correction in certain stocks, in contrary with stocks that will benefit from the return to normality and from the expected or/and real inflation rising.

Jerome Powell, chair of the US Federal Reserve (FED), in a TV interview on Thursday, mentioned that the US economy is in a good shape but there’s still a lot to be done in order to reach the desired targets in the Unemployment Rate and Inflation. He also stated that the Interest Rates will not rise before Inflation reaches 2% and since this seems like a faraway scenario, most likely we’ll witness a long period of low rates. Confirming this, he also underlined that the high yields of the government bonds (US 10-year yield is a bit below 1.60%) will NOT change the Monetary Policy of USA.

Of course, we saw a strong USD and it kept rising during last Friday because the news from the US jobs market were quite impressive: 379K new job position in February while there was expectation for 182K and the Unemployment Rate dropped to 6.2%. At this chain of positive news, came to add on Saturday the expected approvement from the Senate of the economy aid package of $1.9 trillion. The stock Indices that had a bullish movement on Friday allowed the loss limitation and, in some cases, the week was profitable. Oil keeps on rising while gold continued with strong weekly losses. Finally, Bitcoin recovered above $50,000, sending high hopes and lots of smiles to the crypto investors.

The current week is dominated by the Interest Rates decision in ECB and the Monetary Policy in Eurozone. The rates are expected to stay unchanged at 0% but there may be a case that ECB will increase the purchased assets in order to deal with issues such as the Inflation and the high bond yields.

EURUSD (Euro vs US Dollar)

Strongly bearish was the last week for EURUSD which opened at 1.2070 and closed at 1.1910 since USD strengthened impressively after Powell’s statements on Thursday and after the new job positions release on Friday. The supports of 1.20 and 1.1950 fell easily and the pair reached the price levels of the last November. Besides USD and its latest strength during the last weeks, we expect to see the Interest Rates decision along with the Monetary Policy of the Eurozone on Thursday which may cause high volatility and may give a new tone to the pair’s trend. In case of downtrend continuation, the next support is far enough, to the price area of 1.16 which will be the main target for our sell positions this week.

Corrective week for GBPUSD, the second in a row, as the pair opened at 1.3931 and closed at 1.3832, fixing this way prices much below 1.40. UK starts a gradual re–opening of the economy and a lockdown partial abrogation while the economic announcements of the last week were not negative at all but the great strength of USD, pressed the pair to a bearish movement. Now all lights fall on the speech of Andrew Bailey (Bank of England) on Monday but if USD keeps on strengthening, we may see even lower price levels for GBPUSD, to the supports of 1.3760 and 1.3565 which may be our targets for our sell positions in the current week.

USDJPY kept on rising for one more week with an impressive performance. The pair opened at 106.48 and closed at 108.38, performing the biggest percentage rise on a weekly basis since the previous spring. The bond yields in USA that keep on rising, have a straight affection on the pair, putting the positive Japanese news (Unemployment Rate dropped to 2.9% and the Consumer Confidence climbed in February at 33.8 from 29.6) in the second place. The five out of six last weeks were bullish and USDJPY may show signs of exhaustion and overbought attitude but the uptrend is clear and the main target of our buy positions is the milestone price area of 110 which is realistically feasible.

Another bullish week passed by for EURJPY (4th in a row), which opened at 128.54 and closed at 129.09. It seems that the majority of the investors is moving away from JPY so the pair is moving higher without a significantly strong EUR. Under these circumstances, we may see attempts of recovering the price area of 130 again so buy positions is our selection for this week.

EURGBP returned to its bearish trend during the last week, by opening at 0.8658 and closing at 0.8610. This downtrend for the pair, begun from the end of last year and the price area of 0.92 and currently the major target for the pair’s sellers is the milestone price of 0.85 which we’ll go after as well with our sell positions.

It was a bearish week for USDCAD, which opened at 1.2727 and closed at 1.2656. USD appeared strong but the great rise of the oil prices, which is a fundamental exporting good for Canada, caused a strong CAD too and the result was downtrend movement for the pair. The oil prices perform high profits and override all the other factors that may influence the pair. Given this fact, the pair’s sellers tick their eyes prices for USDCAD to the area of 1.25 and by following this logic, we’ll try sell positions as well.

Very strongly bullish was the last week for USDCHF, as it opened at 0.9085 and closed at 0.9308, performing the biggest percentage rise on a weekly basis of the last year. Strong USD is the most dominating factor of the pair’s uptrend during the last week by giving a strong uptrend momentum which may bring it to the price area of 0.95, if the conditions remain the same. We believe so and we’ll try buy positions this week.

Last week was bearish for AUDUSD since it opened at 0.7709 and closed at 0.7680. The pair is obviously affected by the strength of USD but early this week it seems to react higher as the Chinese economic results (Imports/Exports/Trade Balance) were much better than expected. Of course, it may be temporary if USD keeps on strengthening and in case that the main commodities (mostly gold) keep on dropping. The next critical support levels for AUDUSD are the price areas of 0.7620 and 0.7560 which will target by opening sell positions this week.

The US Index SP500 managed to turn positive by the end of last week by closing at 3,840 points and profits like 0.80%. Until last Thursday, the Index was deeply into the negative area but the Powell’s speech and the US job positions announcement caused a bullish reaction. As a result, the corrective movement of SP500 stopped for a while but that does not mean that we avoided it permanently.

Early this week, the futures of SP500 are red, ignoring the decision of the Senate on Saturday that approved the new economic aid package in USA. A clear bullish breakout of 3,860 points will bring the Index to an uptrend mode but on the contrary, below 3,720 points the concerns will rise up again regarding a bigger correction. Above 3,860 points we may try long positions but below 3,800 points we may try short positions.

Bullish was the last week for DAX30 since it closed at 14,042 points, performing profits close to 1.80%. There is an oscillation around 14,000 points (during the last few months) and it seems that the investors are looking for the necessary “fuels” in order to have a new bullish movement. Below 13,850 points the concerns for a strong correction increase but in case of solid prices above 14,000 points there will be many smiles amongst the buyers. Our selection is to try long positions this week.

Strongly bullish was the last week for FTSE100 which closed at 6,684 points, with profits that surpassed 3.50%. The partial lockdown revocation which starts this week in UK, creates tones of optimism to the investors community that the economy will return soon into a healthy growth. This fact is able to push the Index much higher and we’ll try long positions, targeting the next resistance at 6,750 points. In case of a trend reversal, the next major support exists at 6,430 points.

Gold moved lower for one more week, closing at $1,698 with losses that touched 2%. The high yields of the US government bonds give an alternative solution to the safe-haven investors, pushing gold below $1,700 for the first time since the last June. With a strong USD (gold is denominated in USD) we may see lower prices, maybe close to the major support of $1,671 which is also a yearly low price for the asset. Short positions is our primary selection on gold in the current week.

Impressively bullish was the last week for oil as the futures of the next month closed at $66.23, performing profits more than 7.50%. The latest decision of OPEC (last Thursday) not to increase the oil producing in April, triggered a mini rally on the oil prices which carried on as well in Friday with the positive news from the US jobs market. On top of all these, came to add the missile attack in the Saudi Arabia oil premises which was blocked but it created concerns because these premises are maybe the safest and most guarded in the whole world. The oil price keeps on rising and we’ll not be surprised with prices above $70 quite soon so long positions is our selection for the current week.

Bitcoin had a bullish reaction after the recent huge correction by closing at $50,067 with profits that exceeded 12.5%. The positive news for cryptos returned since MicroStrategy (big Business Intelligence and Software company) announced that will increase the positions in Bitcoin. In between a positive outlook, Bitcoin managed to surpass again the milestone price levels of $50,000 but the volatility is still very high. Above $52,650 we expect to see a bullish movement acceleration and we may also see attempts of reaching the all-time highs at $57,493 so what we’ll open is long positions in this week.