0 0   
By aquant Blog May 6, 2022
London 06/05/2022
Nervousness is the feeling that dominates the financial markets in the current week. It can be verified by the very high volatility of almost all the asset classes. The Fed hiked the interest rates by 0.50%, as expected, but the statement that the 0.75% hike is out of the question for the next sessions, caused a temporary drop in the USD as the markets had a hidden expectation that a 0.75% could happen in the next couple of Fed sessions. The week’s earthquake though came from the Bank of England which rose the interest rates by 0.25% (as the markets expected) but the speech of Andrew Bailey that followed was a scary movie. The bank revised the growth estimations for the 2022 and 2023 downwards and expressed the concern that the inflation rate could be a 2-digit figure in the same period. Many analysts believe that there will be 2 more hikes during the year and no more, as more hikes could hurt the growth. This was an alert for the global economies because many think that the same situation may prevail everywhere and a recession could hurt most of the countries. The sterling had a sharp downtrend while the US dollar continues its bullish trend after the short parenthesis on Wednesday.
The major stock indices are bearish this week with a series of open issues: war in Ukraine, lockdown in China & supply chain problems, high inflation, interest rate hikes, and concerns about the growth. The bond yields are in a bullish rally for the 5th week in a row and the US 10-year bond yield opened the week at 2.93% and is currently at 3.07%. All eyes now are on the NFPs announcement in a few hours. The consensus is 391K new job positions in April and a positive outlook of the jobs market in the US may encourage the Fed for quicker and more efficient actions. If this conjecture comes true, we may see further dollar strength. 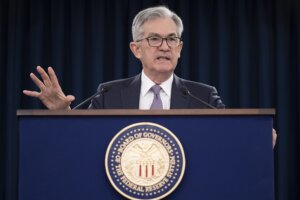 EURUSD (current price at 1.0563) is neutral this week so far although the NFPs may change this fact. The pair took a good uptrend after the Fed’s interest rates decision on Wednesday but very quickly the strength of the US dollar prevailed and the EURUSD returned to its long-term bearish trend. The macroeconomic calendar for both the US and the Eurozone economies has a secondary role as the war in Ukraine, the inflation, and the central banks’ decisions are on the spot. It seems that an important support has been developed at 1.0470 and the pair is not ready to break it out until now but strong NFPs results may be the necessary ‘fuel’ for this case.