0 0   
By aquant Blog May 11, 2022
London 11/05/2022
Today is the most important day of the week regarding the financial markets as three major events took place. First of all, earlier today, the inflation in Germany was announced at 7.8% (harmonized index of consumer prices) just as the markets expected so the impact on the euro was almost piddly. Later on, the president of the ECB Christine Lagarde in her speech underlined that the Asset Purchase Programme (APP) should be concluded early in the third quarter and a rate hike could come a few weeks later. The markets interpreted the above statements as a more hawkish stance and the euro had some mild profits. The major event of the day though was the US inflation in April which was announced at 8.3%, a bit lower than the 8.5% in March, although higher than the markets’ expectations of 8.1%. The first reaction of the markets was a strengthening of the US dollar, although we see a pullback as time goes on.
As per the other markets, the major stock indices are bearish this week, gold extends its losses for the 4th week in a row and the US oil is trying to recover today after two very bearish days that brought the price even below $100. Finally, we see a slight decline in the bond yields, as the US 10-year bond yield has dropped to the area of 3% although it started the week at 3.14%. 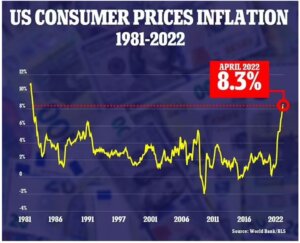 EURUSD (current price at 1.0547) is neutral this week as the current price is very close to its weekly open price. Some factors make the euro stronger such as the hawkish stance from Christine Lagarde earlier today and the economic sentiment that was announced in Eurozone & Germany better than expected. On the other hand, the US dollar retains its strength, especially after the inflation announcement in the US, given that the rest of the economic calendar is relatively empty. The major support of the area is at 1.0470 but the EURUSD may further recover if the perception of the markets is that the Fed may slow down its aggressive interest rate hikes policy since the inflation monster seems to subside.
GBPUSD (current price at 1.2360) is mildly bullish this week because the strength of the US dollar lessens and the economic calendar in the UK has nothing to contribute so far. Although there are some concerns regarding some implications of the Northern Ireland Protocol for Brexit and although the fears for a recession in the UK remain, the sterling seems to make it without further losses. Tomorrow the UK GDP for the 1st quarter of 2022 is announced and the markets will calibrate the probability of recession, given the results of the first months of the year. Below 1.2260 the downtrend may accelerate but on a solid break out above 1.24, the probability of a further recovery increases.
USDJPY (current price at 130.25) is bearish this week after the falling of the bond yields and the deceleration of the dollar’s strength. The higher-than-expected inflation in Japan that was announced in the previous week may have frightened the executives of the Bank of Japan. Negative interest rates and loose monetary policy is the current state but if the monster of inflation starts to fester, there may be a change of mind. As long as the pair remains above 130, the uptrend seems secure and the major resistance for a further bullish movement is at 131.35.
DISCLAIMER: The information produced by a-Quant is of a general nature only. It is not personal financial advice. It does not take into account your objectives, financial situation, and personal needs.