The US dollar had another super profitable week and the USD Index has reached the highest levels in the last 19.5 years. On Wednesday, the most important announcement of the week was released, which is the US inflation in April which was announced at 8.3%, higher than expected but lower compared with the 8.5% in March. On the following day, Jerome Powell of the Fed reiterated that most likely the interest rates in the US will hike in the next two meetings by 0.50% each time. This hawkish behavior of the Fed, combined with the risk-off mood of the markets due to the Ukrainian war strengthens the dollar very much. ECB’s President Christine Lagarde hinted at a July rate hike but there’s a significant delay in actions compared with the Fed. Inflation in Germany was announced at 7.8% (the harmonized price of consumer prices) as the markets expected but the Eurozone’s industrial production performed better than the markets’ expectations, stopping the euro a bit from its sharp downtrend.

Most of the major stock indices will close the week with losses (DAX40 is an exception on this), gold has had one of the lossiest weeks in the last months and the US oil is stabilizing at $108 – $110 per barrel. Interesting enough is the de-escalation of the bond yield prices since the US 10-year bond yield dropped below 2.90%. 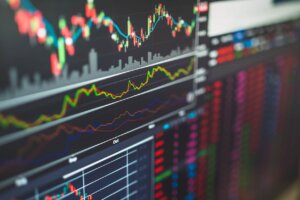 EURUSD (current price at 1.0378) is very bearish this week but the downtrend has stopped at the price area of 1.0350 which is major support as we have already underlined in our previous reports. Things became more bearish for the pair after the announcement of the US inflation which was interpreted by the markets as an extra pushing factor for the Fed to apply a more hawkish policy and after Powell’s radio interview where he confirmed the next two interest rate hikes of the Fed. Below 1.0340 the EURUSD will be at its lowest price since Dec 2002.

GBPUSD (current price at 1.2194) cannot escape from the heavy downtrend that it entered about 4 weeks ago. Beyond the central banks, the monetary policies, and the interest rates, the UK had a series of economic announcements this week. Almost all the macros (GDP, trade balance, industrial production, manufacturing production) in March were well below the expectations of the markets, confirming the fact that the UK will be affected by the war in Ukraine much more than it was initially estimated. Since the pair has dropped to its lowest price of the last two years, we need to spot that the next support above 1.20 is at 1.2075.

USDJPY (current price at 128.95) will (most likely) have its first bearish week after nine consecutive bullish weeks. This fact seems a bit unusual since the US dollar is in a strong uptrend but the other major factor that affects the pair and it is the bond yields are in a heavy correction this week: the US 10-year bond yield has lost 7% since the beginning of the week. This factor weighs more on the trend of the USDJPY during the current week but in the last few days, the Japanese currency seems to strengthen as well. The higher inflation that was announced by the Bank of Japan has convinced some analysts that the loose monetary policy will end soon. Nevertheless, the major trend remains bullish and above 130 we remain a strong come-back. Below 127.50 the correction will start having a more permanent role.